What began 12 years ago, has come to fruition! 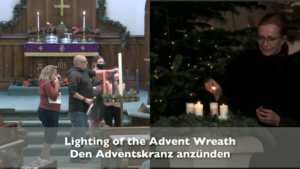 What began 12 years ago as a pastoral friendship came to fruition this past week in a wonderful way. On Sunday, December 5th, Grace UCC, Frederick, joined the Pfarrbereich Weferlingen in our German Partner Church and together they celebrated a joint service of Holy Communion in which they signed a formal agreement of partnership naming each other as “sister churches”.

The relationship between Grace and the 6-church parish of Weferlingen began when their pastors Thomas Vesterling and Rob Apgar-Taylor became friends.

The idea was talked about, but it was decided to let it grow organically and see where God led. SA will be on hand and can answer general questions about the completion and use of the Snapshot and the Profile, as well as answer questions about the use of the system in the search and call process. The training is approximately 45 minutes in length and recurs a week later with identical content. Additionally, this training will be recorded and will be available on the UCC website and Suran’s YouTube site for future reference.

Then in 2017, the Grace Church choir was invited by the Bishop of the EKM to come for a 5 city concert tour to celebrate the 500th Anniversary of the Reformation. One of the Churches where they performed was St Lamberti’s in Weferlingen. The people received us with such love.

The next year, a group of German lay and clergy leaders came to the CAC as part of a symposium on Racism and the Church. In an unintentional act of the Spirit, The Church Council President from Weferlingen stayed in the home of the Church Council president from Grace and a friendship was born that continues today. The 2 church communities governing bodies decided to explore a more formal agreement, and though a covenant was drafted, Covid stopped the formal signing and celebration.

Finally, after 2 years, the day happened. On December 5th, the people of the German parish gathered at 5 PM and we gathered at Grace Church at 11 AM and together we shared songs, readings and sermons in both languages led by Rev Dr Rob Apgar-Taylor, pastor at Grace and the present pastor in Weferlingen, the Rev. Karen Simon- Malue.

Our Associate Conference Minister Shareesa Simpson-Rice joined us and preached in English and helped concelebrate the Sacrament. What does this new Agreement mean for the two church bodies? It’s an intentional attempt to be in relationship, through prayers, shared worship, common mission projects, visits, and more. Our first transcontinental Eucharist was very well received and both communities look forward to doing it more regularly!

THE CATOCTIN ASSOCIATION
is part of the Central Atlantic Conference in the United Church of Christ.